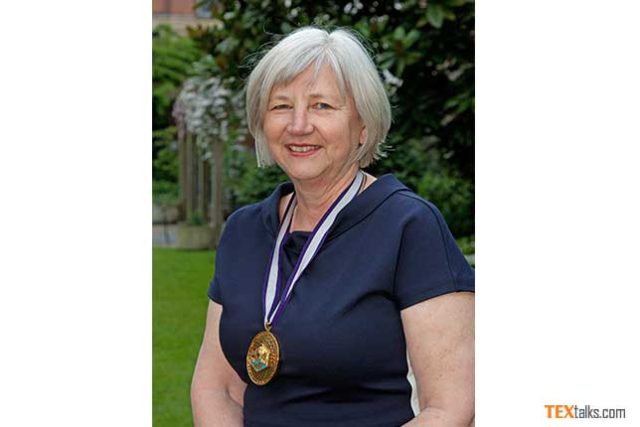 SDC has announced the appointment of Sue Bolton as their new President. The ceremony took place at the SDC’s annual Day of Celebration held recently in York.

Sue joined the SDC in 1974. She went to Bradford University to study for a Bachelor of Technology degree in Color Chemistry and Color Technology. Sue became a member of the SDC Bradford student section, eventually becoming chair.

Sue was accepted by Marks and Spencer as a graduate recruit. Her first role was as laboratory technologist, testing textiles, among many things, for color fastness and physical performance.

Sue’s role at M&S evolved so her role equivalent today would be legal compliance and product safety manager for non-food. In parallel, she became extensively involved with BSI, CEN and ISO standards committees primarily related to textiles, and since 2006 has chaired a CEN working group on safety of children’s clothing (TC 248 WG 20), and BSI committees on burning behavior of textiles (TCI 66/-/8) and care labeling and cleansing of textiles (TCI 82). From 2012-2017, Sue was chairman of ISO TC 38 SC1, the international standards committee for color fastness of textiles.

In 2004, she left Marks and Spencer to establish Bolton Consultancy Ltd, providing textile consultancy to micro and global brands.

In 2005, Sue was invited to chair the SDC’s Technical Co-ordination Committee and joined SDC’s Council. Amongst other roles she was elected Honorary Secretary 2013-2018.

Sue commented “My Presidential mission is to promote the benefits of SDC membership, education and qualifications, particularly Chartered Colorist. This will promulgate better use of Best Available Technology by the coloration industry, leading to reduced environmental impact“.